Each year, the NOACA staff analyze crash data from the previous five-year period to identify the “state of safety” for the transportation system in the region. The data and results from this analysis are organized into the State of Safety Report, which is updated annually and is posted to this webpage.

These reports indicate the safety performance of intersections and roadway segments throughout the region, and the results of the analysis are used to identify priority locations for potential safety improvements.  This task is important because safety is considered when evaluating projects for addition to the TIP, so that safety needs can be incorporated into proposed projects when the opportunity arises.

The annual review of crash data allows NOACA and its partners to track performance toward regional safety targets, both those to be reported to ODOT for the five federally-mandated safety performance measures, and those to be tracked at the regional level as outlined in the SAVE Plan.  The critical evaluation of these results will identify where greater effort is needed to achieve better results.

One of the important elements of each year’s State of Safety report is the identification of regional safety priority lists.  Safety priority locations were developed by evaluating historical crash performance at intersections and along roadway corridors.  The safety priority lists consider the total number of all crashes and the combined number of just fatalities and serious injuries (FSI’s) that have occurred at intersections or along one-mile defined-length corridors that make up the region’s non-freeway road network.

Emphasis is placed on prioritizing safety at locations that 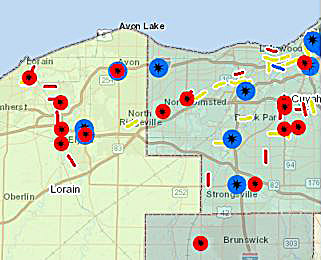 The locations identified on these safety priority lists can be view in a map-based format from the GIS Portal on NOACA’s website and by selecting the “Safety” layer.