The primary focus of the Regional Safety Program (RSP) is improve safety by reducing crashes, particularly fatal and serious injury crashes, on all modes of transportation in the NOACA region.

The RSP is founded on the analysis of crash data reported by law enforcement agencies to the Ohio Department of Public Safety that summarizes of each documented crash in the Ohio.  This crash data and Ohio’s road inventory data are integrated to allow for analysis at both a high level (to evaluate broad trends) and at a detailed level (to identify specific locations) across our five-county region. 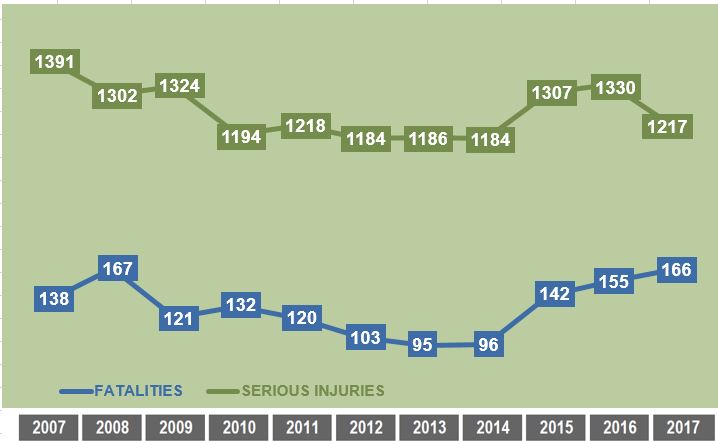 This chart shows number of fatalities and serious injuries that have occurred between 2007 and 2017.

Fatalities have increased 7% in the past four consecutive years in the region, from 155 in 2016 to 166 in 2017.  On a better note, serious injuries declined over that same period, falling a little over 9%.

Regional trends have followed the same general pattern observed around the state and across the country over the last 10 years; namely, that following consistent declines, fatal and serious injury crashes have been increasing since 2013 and 2014.